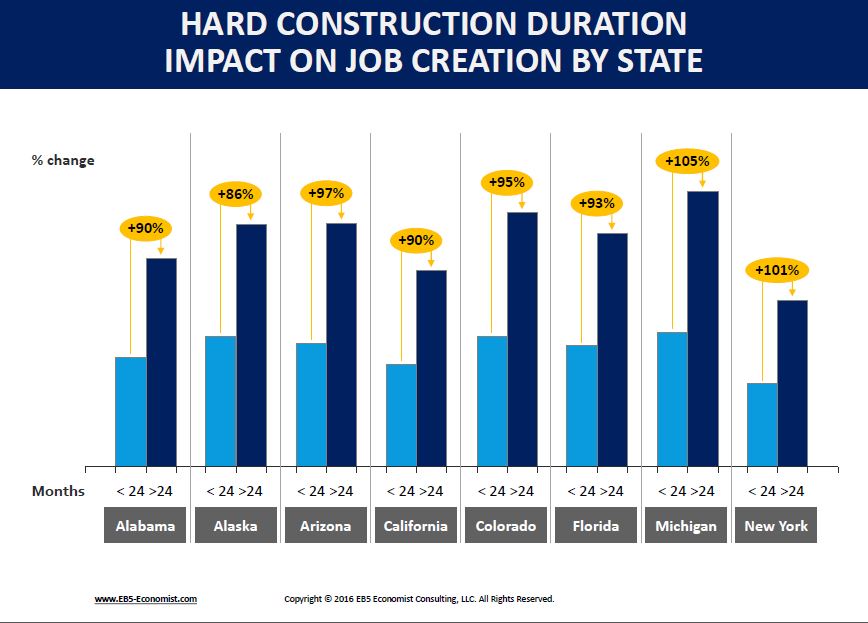 When it comes to EB-5 project job creation, most project sponsors focus on the importance of construction duration and neglect the importance of EB-5 project location. Having a project located in a targeted employment area (TEA) is usually the goal, but, as we’ll discuss, not all TEAs are equal, and choosing the wrong location could have a detrimental impact on job creation.

The basic premise of EB-5 economic models such as RIMS II is that an initial change in economic activity has a ripple effect throughout the economy. Building a new bridge requires an increased production of concrete and steel. The increased production of concrete and steel requires more mining. Workers hired to fill these new mining, production, and construction jobs spend their wages in the local economy, which produces further ripple effects.

Another assumption the economic models make is that materials are more likely to be bought in an area close to the end user. For instance, a developer is more likely to buy nails from a local supplier rather than buying them out of state and shipping them to the construction site. Likewise, if raw goods are produced locally, the economic models assume these goods will be used rather than goods produced from farther away. Furthermore, the models assume that workers hired to produce and use these goods spend their wages locally, which has a ripple effect throughout the local economy. As a result, an area that has many producers and suppliers of the materials an EB-5 project will need is expected to create more jobs locally than a project located in an area where goods must be brought in from elsewhere.

Also note that the impact area of a project differs from the impact area created by sourcing inputs for the development of a project. In our bridge example, the assumed “economic impact area” would be limited to the area in which local residents who use the bridge for commuting or other daily activities reside—the area would not directly include the location of mines, which might be located two states away, for the bridge’s raw inputs. This, of course, is all reflected in the assumed impact area of the project (e.g., a single county, metropolitan statistical area (MSA), etc.) and, thereby, in the RIMS multipliers that show economic impact by industry for that assumed area.

This brings us to the importance of EB-5 project location. All else being equal, a project located in an area rich with industry and manufacturing will produce a greater number of local jobs than one located in an area lacking industry and manufacturing. Manhattan, for example, is a hotspot for end users but has very few raw material providers. As such, job creation is lower because dollars are being put to work outside of the immediate economic impact area of a project. Michigan, on the other hand, has numerous manufacturers and raw input providers, and therefore projects in this state see greater local job creation because most of the money spent on inputs remains in the local economy.

Of course, this begs the question, “Why not use larger economic impact areas for projects in order to get credit for more jobs?” An economic impact area is dictated by the project’s line of business, not by the inputs required to build the project. A local restaurant is likely to service patrons who reside nearby and should have a smaller geographic impact area than a theme park, which will attract visitors from outside of the immediately surrounding areas.

Once EB-5 project location has been established, the next focus should be on construction duration. USCIS deems that construction begins when shovels hit the ground and that it continues until the time the temporary certificate of occupancy is received. If construction lasts less than 24 months, only indirect and induced jobs may be counted toward job creation. If, however, construction lasts 24 months or longer, direct jobs may also be counted toward job creation. (For a more detailed discussion on direct, indirect, and induced jobs, please see this post.) The difference between job creation for these two time periods is significant. In most instances, job creation nearly doubles once construction passes the 24-month mark—and greater job creation allows for either a higher EB-5 capital raise or a greater cushion beyond the requisite 10 jobs per EB-5 investor.

For more information or to engage our team for economic impact reports, please email us at info@eb5-economist.com.